Chickpea, growing in the vegetable garden and the field

HomeBlogFlowersChickpea, growing in the vegetable garden and... Previous item Why do leaves on plants... Next item Plant selection criteria

Chickpea, growing in the vegetable garden and the field

When and how to grow chickpeas in the vegetable garden and in the field. What are the appropriate cultivation practices for an efficient cultivation.

Botanical classification: Botanically it belongs to the species Cicer arietinum of the Fabaceae family.

Production data in Greece: in recent years there has been a significant increase in the cultivation of chickpeas as well as lentils and beans in our country. This increase reaches up to 30% in acres nationwide.

Production data in Greece: in recent years there has been a significant increase in the cultivation of chickpeas as well as lentils and beans in our country. This increase reaches up to 30% in acres nationwide.

Cultivation time range: sowing takes place in February to March and harvesting at the end of July. In areas where there is no problem with high soil and atmospheric humidity, cultivation can also be done in autumn.

Marketable part: The seeds in the pods of the plants. Chickpeas are consumed either boiled or dried as a nut (stragali). In the old days adulteration of Greek coffee with chickpeas was widespread. Consider carbohydrate-rich food mainly starch 55% and protein 25% like all legumes.

Height – Plant growth: the height of the plant can reach up to 75 cm. Chickpea is an annual herbaceous plant.

Leaves: compound leaves with 6.15 pairs of rhion leaflets. The leaves have a toothed circumference and are hairy

Flowers: chickpea is a self-fertilized plant.

Fruits: The pods of the plant are hairy and bear one or two seeds. The fruits are round with slight grooves.

Roots: the root system in the chickpea is rich and well developed. In the roots of the plant, as in all other legumes, tubers are formed, where conventional relationships between the roots and nitrogen-fixing bacteria occur. At the end of the crop, incorporating chickpea crop residues into the soil significantly enriches the soil with both organic matter and nitrogen. 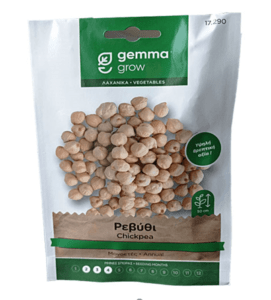 Temperature: it is a plant quite resistant to drought and high temperatures.

Soil-Soil: can be grown in both saline and alkaline soils. It is good to prefer mes that do not retain much moisture, while the slopes that turn more easily are preferred. Medium-textured soils are ideal with a pH of 6.5 – 8.

Humidity: high soil and atmospheric humidity does not favor the growth of the plant. Coastal areas are considered unsuitable for chickpea cultivation due to the growth of ascochytosis fungi.

Ground preparation: the ground should be organized and leveled and foreign materials and stones should be removed.

Irrigation: chickpea cultivation is considered a dryland crop. If it is possible to water once or twice during the period of flowering and filling the pods the production is much higher.

Other tasks: frequent weeding is a very important task for chickpea cultivation as it competes too much with the weeds for nutrients thus affecting the growth and productivity of the plants.

Algae, a natural fertilizer for plants

Crop rotation: from the olden days there was crop rotation with cereals and pulses. In this way the cultivators succeeded in enriching the soil with organic matter from the leguminous plant due to the nitrogen-fixing bacteria and in addition better derivatives in the grains.

Plants per sq.m. a planting density of 50 to 60 plants per square meter is usually recommended in meso-sperm and large-sperm households

There are three major categories based on the qualities of chickpeas which are the micro-seeded, meso-seeded and large-seeded varieties.

Regarding the Greek varieties of edible chickpeas, the best known are the Thebes variety, the Gravia variety and the Evros variety. The variety Thebes is large and takes me with the seeds being white in color.

Enemies and diseases affecting the plant

Insects that attack chickpea cultivation are from the lepidoptera Helicoverpa armigera and Agriotis sp. and from Coleoptera Bruchus (Bruchus sp.).

In addition, it is also affected by nematodes.

Chickpeas are harvested towards the end of July. Yields per hectare for chickpeas reach about 100 kg, while if we have one or two irrigations during the critical periods of flowering and pod setting, the yield can reach up to 250 kg per hectare.